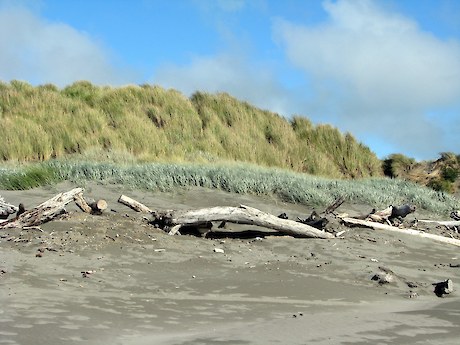 Two sand binding species on foredunes that can sometimes be difficult to identify - the native spinifex (front) and the exotic marram grass (back), Manawatu coast.Vegetation cover

One of the aims of coastal monitoring is to identify the key native and exotic plant species that are living on the dunes.

The exception is for most exotic grasses and herbaceous species unless users are competent at identifying key exotic species that can dominate some dunes such as kikuyu.

Most species found growing on your dunes are likely to be listed.

When entering species into the database, the 6-letter National Vegetation Survey species code is used. A list of the species that can currently be entered into the database showing the 6-letter code as well as the scientific, common, and Māori names can be viewed on the printable species codes page. Further information to help identify species is available at the New Zealand Plant Conservation Network website. Note that when a sample point has no no live vegetation, the species code column must be left blank.